In early 1961 plans developed to move the Burlington Junior College operation to the vacant School District Saunderson Elementary School site on Valley Street. A gift of $100,000 from Mr. John H. Witte, Jr. provided the sums for correcting the deficiencies in the building and adding a chemistry laboratory with the most modern facilities, a physics laboratory and lecture room, and engineering drawing and business education rooms were created on the top (3rd) floor. Utility services were improved and the building was occupied in the summer of 1961. Career and Technical Education programs began making their appearance in the total offerings of the Burlington Community College. (Notice the change of name.) With the advent of the establishment of the Southeastern Community College in the mid 60's, a structure on Highway #34 in West Burlington housed most of the Vocational/Technical programs and administrative offices except Elementary Education. These programs eventually were moved to the Southeastern Campus in 1972.

The 61st Iowa General Assembly passed Senate File 550 which changed the legal structure of community colleges in Iowa. This legislative act permitted the establishment of 20 multiple-county educational institutions. Burlington and Keokuk Junior Colleges were located in Area XVI which included 3 l/2 counties--Des Moines, Lee, Henry and the south half of Louisa. The name of the new institution was Southeastern Community College. Plans for a new campus prompted the purchase of one hundred and sixty acres of land west of the Des Moines County Fairgrounds.

In 1968 internal unrest developed as the result of a controversy around liberal arts and vocational/technical educational division which resulted in the replacement of Mr. Burkheimer as Superintendent and the naming of Mr. C. W. Callison of Keokuk Campus as the new Superintendent. It was during these trying periods of unrest that Dean Stonehocker chose to retire in 1968 and Milton Meuler served as the Director of the Arts & Science Division--North Campus--until the move to the new Southeastern Campus in 1972. It was through his foresight that educational services were expanded in Area XVI, including educational programs at the Iowa State Prison, Ft. Madison and the cooperative venture of the Des Moines County Fair Association and SCC.

Following Mr. Callison's retirement in 1986, Dr. R. Gene Gardner was named President of Area XVI Southeastern Community College. Dr. Gardner was proven to be another dedicated and strong educational leader of Area XVI and an able leader in community services. Campus facilities at both the West Burlington and Keokuk sites were expanded and constructed under his direction with support from local tax payers. By 2000, new Centers were in place in Mt. Pleasant and Fort Madison and a three-story residence hall built on the West Burlington Campus. In 2005, residence halls were established near the Keokuk Campus and the Center for Business (CBIZ) moved from the West Burlington Campus to the newly renovated River Park Place at 610 N. 4th in Burlington. A 20 1/4 cent levy was passed on 9/11/2001 that provides more than $600,000 for physical facilities improvements each year.

Founded in 1953, as Keokuk Community College, the college was part of the Keokuk Public School system. When the college opened there was 53 students enrolled in liberal arts courses.

After becoming part of Southeastern Community College, the South Campus continued to operate in the same facilities, which were rented from the public school district. As career education programs were added to the predominantly liberal arts and pre-professional programs, facilities were rented in downtown locations.

In the fall of 1974, land was purchased for the construction of College facilities. The 28,000 square foot facilities were constructed, and classes began meeting at this location in 1975.

Since 1990, three new buildings containing approximately 30,000 square feet have been constructed on the South Campus. Adkins Hall houses administrative offices, faculty offices, and the Bookstore. Barr-Wittenmyer Hall houses the Food Service and Cafeteria area, the Library, and a child care facility, which is managed by an outside provider. Gardner Hall houses classrooms, an art lab, a music lab, a learning center, and faculty offices. All three buildings are connected with enclosed walkways. In conjunction with this construction, approximately 5,000 square feet of "V" Building (now known as Bowles Hall) was remodeled to provide updated computer and science labs, as well as faculty offices. This building also contains shop and maintenance areas. With the completion of these projects, removal of five of the pre-fabricated structures that previously comprised the South Campus was accomplished. One of the original structures remained following this construction and housed the business and nursing programs.

In the fall of 1992, Union Electric Company provided a landscaping plan and the materials and plants to landscape the entire South Campus. Approximately 250 shrubs, trees and other plantings were made on the campus.

In the Spring of 1996, the remaining South Campus modular structure was demolished, and construction began on Emeritus Hall. This 16,300 square foot building was completed for Spring Semester 1997, and houses the Office Technology, Business and Nursing Programs, classrooms, faculty offices, and enclosed walkways to the other campus structures.

In 2007, with direction from President Dr. Beverly Simone, SCC purchased a student residence facility in Keokuk. As a result of the efforts of Mr. Callison, Dr. Gardner, Dr. Phelan, Mr. Richardson, and Dr. Simone, Southeastern Community College is indeed a source of pride in Southeast Iowa.

From the time I went to SCC in 1985 to my job as principal, I knew that SCC was a vital part of our community.

END_OF_DOCUMENT_TOKEN_TO_BE_REPLACED

Wondering if SCC is right for you? Check out our campus and learn more about life at SCC.
END_OF_DOCUMENT_TOKEN_TO_BE_REPLACED

END_OF_DOCUMENT_TOKEN_TO_BE_REPLACED

Check our our current class listings. 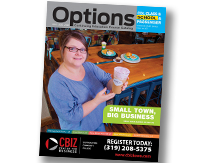