Burlington, Iowa — Longtime marine construction company owner Lawrence Matteson and his wife Marilyn will receive the 2019 Council for Advancement and Support of Education (CASE) District VI Volunteer of the Year Award at its annual conference in Denver, CO, on January 14.

The CASE District VI Volunteer of the Year award is given to individuals who have given time, talent, and/or gifts to further the success of education through a CASE VI member institution.
In 2011, Lawrence sold a portion of their business, the L.W. Matteson Company. Rather than change their lifestyle, the Mattesons decided to put the money earned from the sale toward causes that are important to them.

In 2012, the Mattesons established two scholarship funds to be managed by a local community foundation. Since then, the endowed Matteson fund has provided nearly $230,000 to almost 200 SCC students pursuing an education in more than a dozen career programs in the technology and health professions.

The second Matteson fund helps 12 north Lee County, IA, high school graduates enroll in the college of their choice, with the majority opting to enroll at SCC.

As a bonus incentive, the Mattesons created an option for their scholars to apply for one of four Matteson Continuing Scholarships to help them pursue a bachelor's degree. 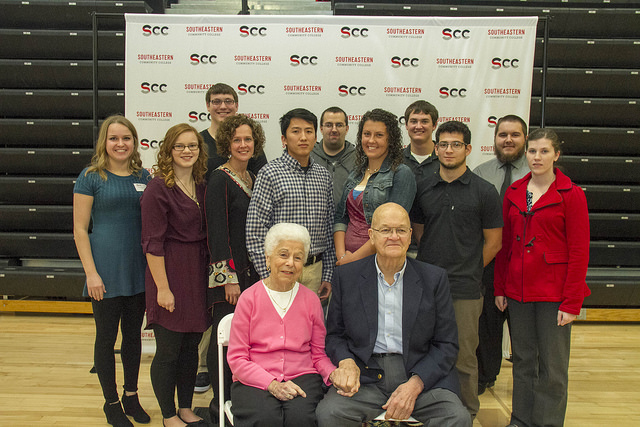 SCC Executive Director of Institutional Advancement Becky Rump says, "The couple always says they love the 'joy of giving while living.' It thrills them to see how genuinely grateful recipients of their scholarships truly are."

In October 2014 SCC began a $12 million health and science capital campaign. The Mattesons donated $3.5 million, the largest gift received by SCC to date. This gift led to many others, which helped SCC achieve its campaign goal.

To honor their generosity, students in SCC's health programs and those taking classes in the physical and natural sciences now do so in the all new Matteson Family Health-Science Complex.

"The Mattesons have humbly used their affluence and influence to directly benefit SCC," says Rump. She adds that surrounding communities served by SCC have also benefited from the Matteson's generosity because of the support given to facilities improvements, career program updates, student scholarships, donor recognition, and workforce development.

File photos of Lawrence and Marilyn are available for download here: https://www.scciowa.edu/marketing/2019/Photos/

Photo caption: Lawrence and Marilyn Matteson pose with a handful of L.W. Matteson Scholarship recipients in 2017. The Mattesons have given nearly $4 million to fund scholarships and facilities at SCC since 2012.

For more news or to learn about Southeastern Community College, visit: https://www.scciowa.edu/rss/news/index.html